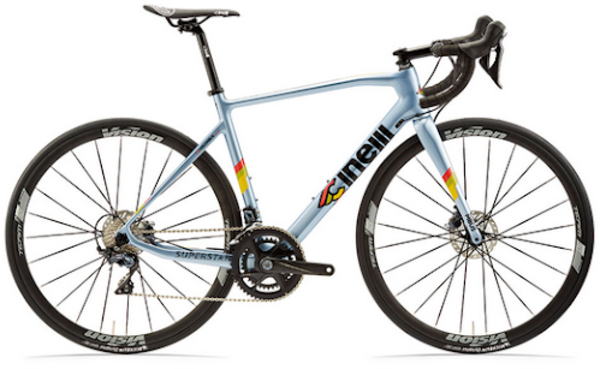 The Superstar is Cinelli’s cutting-edge carbon fiber re-interpretation of the mythical Italian stage-racing bicycle that is the brand’s heritage and DNA.
Unlike other brands who each year offer bicycles with ever increasingly narrow scope of use, Cinelli, when developing the Superstar, obsessed over the way in which the inherent qualities of carbon fiber and its manufacturing processes could be employed to produce an aggressively contemporary version of the legendary versatility of the Italian Grand Tour ride quality i.e. the intelligent balance of low-weight, aggressive handling over highly varied terrain and long-distance riding comfort.

About Cinelli:
Founded in 1948 by Cino Cinelli, an Italian road cyclist who became a professional racer between 1937 to 1944. Cinelli won the Milan–San Remo in 1943, the Giro di Lombardia in 1938, and the Tour of the Apennines in 1937. Cino became interested in bicycle technology after experiencing mechanical failures during races. He began developing innovative new product designs, but failed to gain manufacturer support from others in the bike industry. So Cino partnered with his brother Giotto, who was producing steel stems and bars in Florence. He soon moved the company to Milan, which had become the center of the Italian cycling industry…and art. In 1978, Antonio Colombo, owner of the world-renowned Columbus tubing, assumed presidency of the company, and in 1997 Cinelli became a division of Gruppo S.r.l. The company is still—to this day—run very much like a family business. And like all lovers of cycling, Antonio still very much enjoys riding bikes.